An experiment with super-dense cultivation of dwarf cashew came to obtain, in two years of implementation, triple the average productivity achieved by the variety in the state of Ceará in 2019. The researchers' expectation is to reach a productivity of at least three tons of chestnuts and 27 tons of stalk per hectare / year in the fifth year of implantation of the study, when the plants stabilize their production. The research is conducted by Embrapa Agroindustry Tropical (CE), Secretariat of Economic Development and Labor of the State of Ceará (Sedet) and Fazenda Frutacor, in the Irrigation District Tabuleiro de Russas – 160 km from Fortaleza (CE).

Six different clones were tested, with three different types of spacing. The condition of greater density of the study (6×2 meters) comprises 833 plants per hectare. In the traditional spacing adopted for the crop, of 7×7 meters, 204 plants are cultivated per hectare.

The best combination of clone with spacing resulted in a productivity of 1,606 kg of nuts per hectare / year in the second year of implantation. 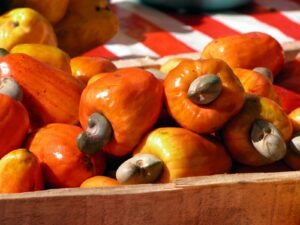 In 2019, the average productivity of early dwarf cashew trees in Ceará – involving all types of planting and several existing clones – was 528 kg of nuts per hectare.

The study evaluates the best condition of over-density, with fertigation, to produce table cashew – a culture far less demanding in water than the traditional plantations implanted in the region, such as bananas and guava. “The intention is to offer a low-demand, productive and profitable alternative to the irrigated perimeter”, explains researcher Afrânio Montenegro, responsible for the research.

According to researcher Fábio Miranda, responsible for irrigation, water consumption is one third of the employee employed in banana cultivation. According to him, it is too early to estimate the relationship between water and productivity, which should express its best results in the next harvests.

In addition to reaching the best clone and spacing, the researchers also want to know how the distribution of production occurs during the harvest, the yield as table fruit and the costs. “As the intention is to produce table cashew, which is more valued in the market, it is important that the production is well distributed throughout the year”, explains Montenegro. He explains that, as the experiment is in the second crop, it is still too early to carry out the economic analysis of the experiment.

The executive secretary of Agribusiness at Sedet, Silvio Carlos Ribeiro, considers that the project is an important step to include cashew in the standards of modern fruit growing, with densification, irrigation, less water consumption and high productivity.

The secretary recalls that the state of Ceará has maintained practically the same cashew orchards for 30 years, which today have low productivity. For him, the project has shown good results not only in terms of productivity, but also in the rational use of water.

Businessman João Teixeira, from Frutacor farm, is optimistic about the experience. The great advantage of cultivation, for him, is the low water requirement of the cashew tree. "It is a very decisive factor to face the water crisis in Ceará", he says. On the other hand, it highlights the phytosanitary challenges and high demand for labor. “Everything is very new, it is a high-performance, high-density project, which requires a lot of manpower, but which has given a good perspective with two clones”, he says.

Teixeira believes that the super-dense cultivation is economically viable in a business model with full use of the production for table cashew, processing the stalk and chestnut. For him, the most likely route of business model for small producers would be associativism. In the entrepreneur's view, medium and large producers will need a structure for processing the stalk close to the production site to take advantage of what is not suitable for trade as table fruit. He evaluates the table market as difficult, due to the high perishability of the peduncle, which requires a cold chain and agile logistics. "Cashew is just as demanding in post-harvest as grapes, apples and pears."

Traditionally the cashew tree is planted with a spacing of 7×7 meters. In the experiment implemented in 2017 in the Irrigation District Tabuleiro de Russas, three different spacings are being tested: 6×4 meters, 6×3 meters and 6×2 meters. Six clones were tested: CCP 06, CCP 76, Embrapa 51, BRS 189, BRS 226 and BRS 265. Each of the clones was implanted in the three different types of densification, resulting in 18 different treatments.

The plants were irrigated daily by drip and received fertilizers weekly via fertigation. There was also spraying of micronutrients every 30 days. The cashew trees were pruned in order to maintain a main stem, four primary branches, eight secondary branches and 16 tertiary branches.

In 2019, Brazil produced 139,383 tons of cashew. According to the IBGE, more than 90% of this production is located in three states: Ceará, Piauí and Rio Grande do Norte. Brazilian productivity, considering the area harvested in 2019, was 327 kg of nuts per hectare, which is considered very low for the potential of the species.

The problem of low productivity is due to the extensive area occupied by cashew trees of the common type, planted in large spacing. The vast majority are plants with advanced age, cultivated with few cultural treatments.

In 2019, despite representing 35% of the planted area, the dwarf cashew accounted for 56% of the cashew nut production in the state of Ceará (IBGE, 2020). According to the Report of the Coordination of Agricultural Statistics (GCEA), of the total of 275 thousand hectares occupied with the culture in the state that same year, about 179 thousand hectares were planted with the common type cashew tree and only 96 thousand ha cultivated with the dwarf cashew tree.