The forecast mainly includes the most popular fruits such as orange, pineapple, lemon and watermelon

The products supply fairs and markets in the Metropolitan Region of Belém and even other municipalities (Photo: Bruno Cecim / Pará Agency) 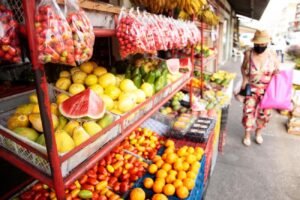 The Supply Center of Pará foresees an increase in the movement of fruit sales due to the arrival of the so-called Amazonian summer, mainly the most popular ones such as orange, pineapple, lemon and watermelon. Ceasa sells fruits, vegetables, hardwoods and tubers. The best sales forecast is from the president of Ceasa, Francisco Aguiar.

"Even in the pandemic, the permissionaries register a good sale. Now in the summer, in July, we expect more movement in marketing", said the president of Ceasa.

The products supply fairs and markets in the Metropolitan Region of Belém (RMB) and even other municipalities. Of the total, 18% are regional products, 81% imported from other states and 1% from other countries. About 4,500 people circulate through the Pará Supply Center every day.

At the Feira da 25, in the Neighborhood of Marco, one of the fairs that receive ceasa products, the movement is considered good by the fairers. "In July, usually, the movement of the fair usually falls a little, but with the pandemic I realized that the population was more concerned with food. Here I sell a lot of orange, lemon and pineapple," said the fairman Jorge Amorim.

And it is exactly these fruits most recommended by nutritionist Wenia Lira. "The consumption of fruits with a lot of water is indicated because in addition to the important vitamins for this period, in which we need immunity, they are refreshing for the hot climate''.

"Antioxidant fruits such as grapes, and others such as orange, acerola and lemon rich in vitamin c are great. Juices are also recommended for those who want to vary and not eat in natura", added nutritionist Wenia Lira.